Where has this week gone???  After our party on Saturday, I have been trying to catch up on “stuff” around the house, get the Christmas cards ready to mail, and do some work.  I managed to get a couple of scrapbook pages done, but not much.

The Christmas cards are ready for the mail though!  Yesterday, I sent out our international cards, but I don’t think they will arrive at their destinations on time.  😦  It is the thought that counts though, right?  Here are our domestic ones ready for the mail today! 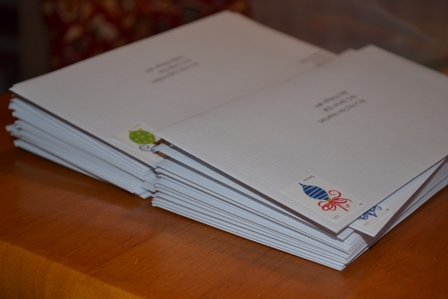 Our elf has been a busy little elf too!  Here is the run down of his hiding spots and some of the treats he left. 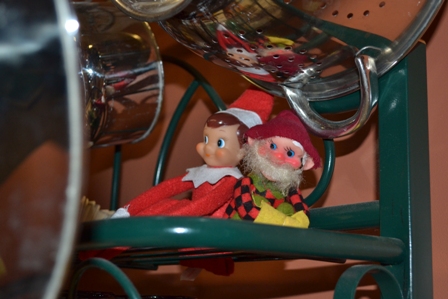 On Weds the 14th… we found them hiding among the sippy cups!

But look at these cool little snacks he left the kids.  (Saw them on Pinterest and we had just 2 little donuts left that night).  🙂 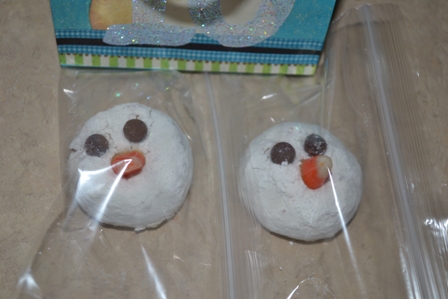 On Thursday, they were snuggled up together in Jack’s stocking.

This morning, Jack found them on the ledge by the basement stairs.  I was quite surprised by how fast he found them this morning, but you just never know.  And just look at how cute my niece and nephew are in these pictures!!  Now they are teenagers, beautiful and handsome, but still teenagers!  🙂 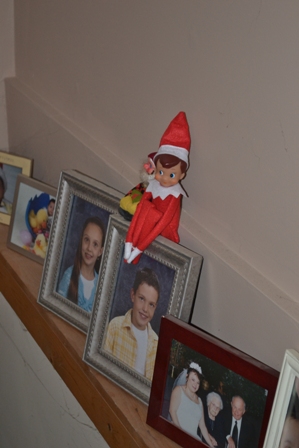 Last night, the kids were playing with their balloon instead of cleaning up toys like I told them 20 times.  I popped their balloon and you would have thought I killed Santa right in front of them.  Probably not the best choice for me to do, but once it was done, it was done.  I told them to get their toys cleaned up and they could ask Diesel to bring them a new balloon in the morning.  Peyton seemed a little unsure that this would help, but she finally decided that she didn’t want Jack to get a balloon and not her, so she asked too.  Needless to say, they both received balloons in their little gift bag this morning along with their Hershey’s Santas.  Hoping the therapy bill won’t be too high in the future!

Well, that brings us up to date on our little elves adventures.  We are running out of places to hide him, I think and the candy supply is getting low.  Might have to start in on some cheap gifts instead.

This entry was posted in Christmas and tagged Christmas, Elf on the Shelf. Bookmark the permalink.